Promoting A Positive Image of the Leather Lifestyle! 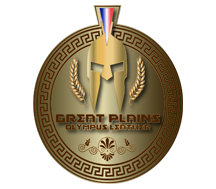 There is no cost, no door charge or cover. You must be 21 to enter the bar however as this venue is a bar.

So here is the schedule for the contest both Friday and Saturday night.

It's looking to be a sexy bunch of folks who are gonna leave it all on the stage for you next starting Friday night June 7 at 6:30pm. You DO NOT want to miss out on this weekend ... it's gonna be HOT... Don't believe us?

Here's what the news is saying about the weather....

And in case you missed our posts on Facebook here are the Judges and their Bios.

Ben Workman is a man with dirty boots and a dirtier mind. In his years holding the Mr. Great Plains Olympus Leather 2017 and International Mr. Olympus Leather 2018 titles he learned that there is no bridge harder to build in the community than the one between the hearts of individuals. Ben thrives on helping to build those connections and on seeing people succeed in finding their own place in our world because of it.

He lives with his fiancée and sash wife Samsara, his Owner Katrine, and her husband Bones on their ranch in North Texas where he cares for their horses, goats, and other assorted critters. Although this life is anything but ordinary, he is intensely grateful for his luck in having it, and couldn’t be happier.

Pup Axel has been in the lifestyle for 12yrs now. He had the awesome privilege to hold the title of Mr. GPOL 2016 . He loves pup play, spanking, flogging, electro, sounds, knife play, breath play, cigars and much more.

When not teaching or out fundraising you can find him in either outdoors with his fur babies or in the kitchen whipping up delicious food and goodies or watching British comedy or golden girls with his bf and fur babies.

Elizabeth identifies as a cisgender queer poly Leather switch. Since 2007 she has been first and foremost Master Todd’s slave and in his service functions as his minion, sidekick and jester. In 2017 she accepted her girl kris into service. She is honored to have served as the Southwest slave 2013 and currently is Ms. Texas Leather 2019.

In 2012 she founded the Austin girls of Leather (AgoL) and serves as the club leader. She is Master’s level counselor who specializes in end of life and grief work. She advocates for LGBTQIA+ rights via presentations in both vanilla and kink settings. She serves the larger Leather community through teaching locally and around the country.

The story of Master Gator started a long time ago in a state far away… being raised between a military father and an “equality for all” mother, his understanding of free chose and the need for rules of a society modeled how he saw the world. When it came to adult orientated material, he found that the once with dominate / submissive flavor to them were the once that he found touched him the deepest.

As he grew into adulthood he looked for those partners who would fit with his desires. During this time it was looked down on very harshly to be seen as wanting to dominate another human, but the heart wants what the heart wants. He was not alone; there were others who shared his desires. They did not always work out, but with each new partner they both learned and grew. Then, in September of 1999 his future wife drug him (kicking and screaming) to an NLA meeting. There he found whole groups of people who shared some of his interested and many more interests he had never thought of. There he found the support, guidance, & examples, he was looking for to understand and accept who he is.

During Gators time in the leather community he has been honored with his leather Master’s cover, presented by several of the covered Masters of the Dallas area in November 2010 for his steadfast support of the leather and kinky communities.

Master Gator has reached that part in his life and his growths, where he can give back to the community that has done so much for him.

Christopher Stinnett is a native of Fort Worth TX and a resident of Dallas since 1989. He has been working his way in from the fringes of the Leather community since arriving in Dallas - Fort Worth not having a visible Leather scene in the late 80s.

He has been a member of Discipline Corps, NLA-Dallas, and reigned as Emperor XL (40) of the United Court of the Lone Star Empire.

Christopher is a past member of Turtle Creek Choral, having sung twenty-two years with the ensemble and having served eight years on the Board of Directors of TCC, Inc.

He currently serves on the Board of the SSC Fund.

Christopher is retired and enjoys traveling, cooking and hanging with friends.

In 2017, Samsara was granted the title of Ms. Great Plains Olympus Leather, and over time and lots of spilled secrets, nurtured a relationship with her title husband that continues to grow through both kink exploration and a shared devotion to diversity education. In 2018, Samsara was named Ms. International Olympus Leather, and solidified her desire to speak on the power of vulnerability, allowing your fetishes to be fun, and learning constantly how to dismantle privilege both in the leather community and the surrounding world. If she could pass on any hope to her fellow leather folk, it would be to make every day a little braver than the past, and to always make it weird.

Master Lady Faye is a Texas native and has been publicly active in the Dallas area since 1998. She has been involved in vending, presented classes, a member of a variety of groups throughout the community. Lady Faye has been on numerous Boards including NLA, Beyond Vanilla, South Plains Leatherfest and Women’s International Leather Legancy.

She has judged many Leather contests .....She holds the titles of South Central Leather Woman 2005 and International Ms Leather 2006. She loves to volunteerat events and give back to the community as well as those who encouraged, mentored and had he back. In her classes and through her actions, she passes on her knowledge to those who share her passions. She is a FLIRT, loves purple ... and is single.